ATREYU ushered in a new movement in heavy music. Their music seamlessly intertwines with formative experiences for a diverse legion of dedicated listeners, many of whom started their own bands. Yet nearly two decades since the release of their first album, ATREYU is just getting started.

Unbound by false restrictions about any particular anthem sounding "too heavy" or "too pop," ATREYU is a creative beacon of hope for anyone shaken by the suggestion that "rock is dead." The Orange County, California band's riffs, hooks, melodies, and passion are essential parts of the emergence of a vibrant subculture across theaters, clubs, festivals, radio, and social media. The artistic fearlessness powering landmark albums like The Curse and Lead Sails Paper Anchor is even stronger.

"We have unfinished business, always," declares frontman and cofounder Brandon Saller. "It's been a steady climb. And that leaves us hungry. There's always more to prove and more to accomplish."

ATREYU's unquenchable appetite for creative achievement and pursuit of a shared catharsis onstage is what drove them to form the band as teenagers around the turn of the millennium. It pushed them beyond their do-it-yourself beginnings to massive festival stages, including two runs on Ozzfest, sold-out headlining tours, movie and game soundtracks, and appearances alongside fellow genre standard-bearers, including Linkin Park, Avenged Sevenfold, Deftones, Slipknot, and Bring Me The Horizon.

A bold chapter in the band's never-ending story of determination, Baptize is a definitive work for a new era. As with the album's acclaimed predecessor, 2018's In Our Wake, Atreyu recorded Baptize in California with super producer John Feldmann (Blink-182, The Used, 5 Seconds Of Summer). It evokes the strength of 2020's "Save Us" single, with the flair for the melodic ATREYU hinted at as far back as 2002's Suicide Notes and Butterfly Kisses, expanded and refined with confidence and attitude.

They've broken into the Top 10 in the Billboard 200 more than once; two of their albums were certified gold; yet ATREYU is never ashamed of the passionate community that spawned them.

Adeptly combining the sounds of thrash, hardcore punk, and the New Wave of Swedish Death Metal, ATREYU quickly evolved to a place where fans of everything from Linkin Park to Lamb Of God could come to the party. Adventurous, ambitious; ATREYU is best described plainly as a loud rock band.

The impassioned melodic wail harnessed by Saller, in ATREYU anthems like "The Time is Now" (streamed 45 million times on Spotify alone), "Becoming the Bull," and "Right Side of the Bed," is upfront and urgent on Baptize. Cofounding guitarist Dan Jacobs and his six-string partner Travis Miguel (who joined Atreyu before their first album's release) remain an impressive duo, armed with heavy crunch and soaring soundscapes in equal measure. Longtime bassist Porter McKnight anchors the band with rhythm and his newly expanded role as resident screamer.

ATREYU's collaborative style of "in the moment" writing really began with 2006's A Death-Grip On Yesterday. It continued in earnest with Lead Sails Paper Anchor (which debuted at No. 1 on the Hard Rock Albums chart in 2007) and Congregation of the Damned (Billboard Top 10, 2009). "Especially in the newer records, it's like, well, what do you want to do today?" Saller explains.

The band's discography boasts several A-list producers. They include GGGarth (Rage Against The Machine, Mudvayne, Rise Against) on The Curse; Josh Abraham (Linkin Park, Slayer, Weezer) on Death-Grip; Feldmann on Lead Sails; Bob Marlette (Rob Zombie, Shinedown, Seether) on Congregation; and Fred Archambault (Avenged Sevenfold) for 2015's post-hiatus comeback, Long Live. "Feldmann got us into this fundamental mantra, which is: 'the song is king.' So, it doesn't really matter what 'style' it is, so long as the song is good," Saller says. "That's most important."

Staple ATREYU hallmarks like the dual vocal interplay between singing and screaming, big riffs, guitar solos, harmonies, and big arena rock grandiosity persist throughout Baptize, elevated to new levels. "All of our elements are there, with a maturity, and without limitations," Jacobs says. "We've even got everyone in the band harmonizing, singing together, like Queen or Def Leppard."

The main hook in "Save Us" came to Porter during meditation. He describes "Save Us" as "a song about how we need to be better versions of ourselves, and if we do that, we will be a better humanity."

The album's title track is both reflective and redemptive, challenging the listener toward self-examination and a cleansing renewal of hope. "Catastrophe" is a love song, twisted through a post-apocalyptic context, about the commitment to another person even as the world collapses all around.

"Underrated" is an anthem for the outsider, the dismissed, the underestimated.

Baptize guests include Jacoby Shaddix of Papa Roach and Matt Heafy from Trivium. "Warrior" features Travis Barker of Blink-182. (Barker's bandmate, Mark Hoppus, did a bit of cowriting, too.)

Porter points to the diversity of tastes and personalities within ATREYU as their greatest asset. And with Baptize, they've connected their complementary pieces like never before to stunning effect. They're veterans at this point, yet a couple of generations behind hard rock's elder statesmen. It's a great vantage point, with a storied past and robust catalog, yet many years still in front of them.

"I constantly remind myself how fortunate we are to be able to keep doing this," Miguel says.

"It's a special thing to be given opportunities to prove ourselves," Saller adds. "And our constant hunger has benefited us. There's a lot we still want to accomplish, and that's what keeps it burning."

As one prominent hard rock critic observed early in the band's career: "If you haven't figured out these guys are aiming for a bigger sound by now, you might want to try cleaning out your ears." 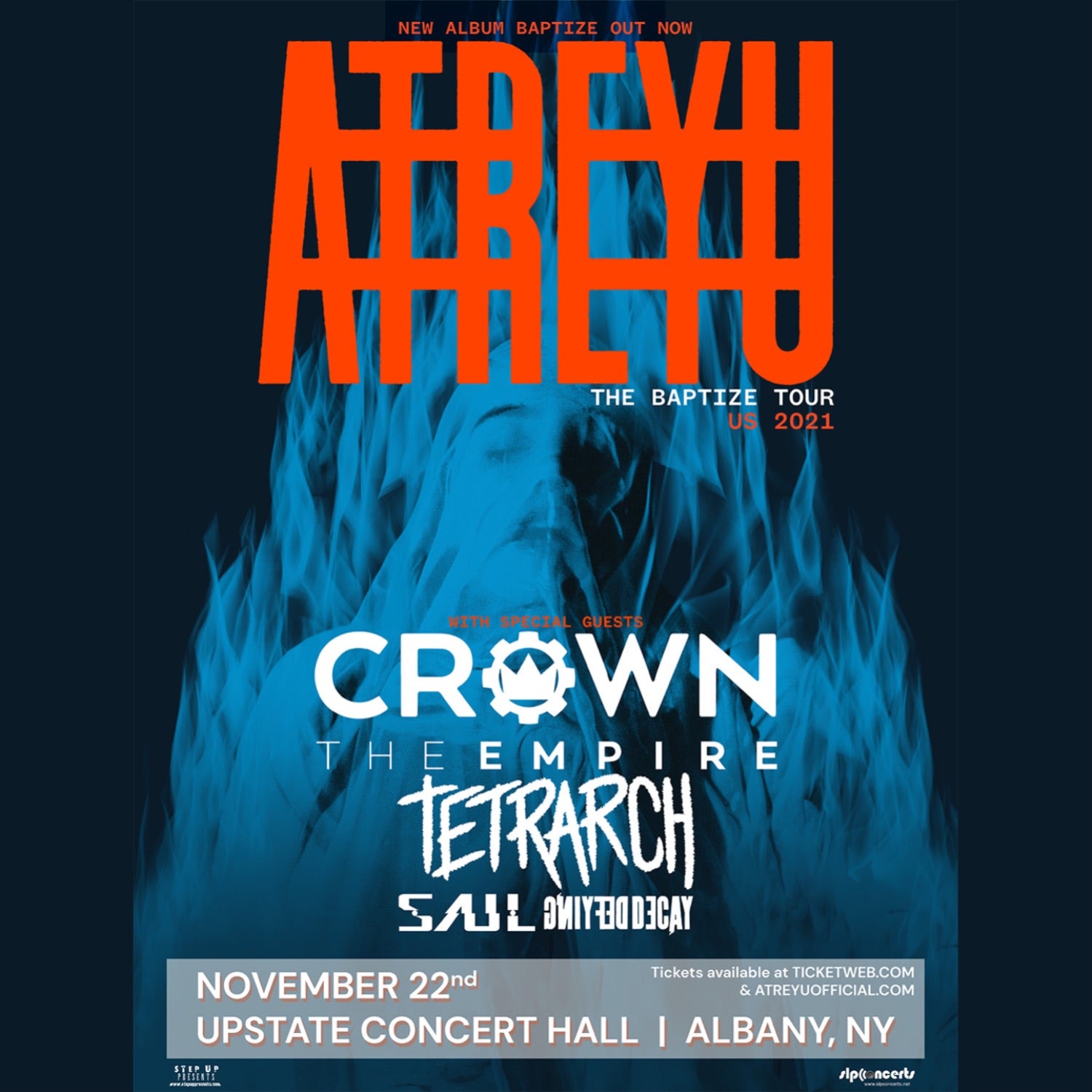