Legendary band, THREE DOG NIGHT, now in its 5th decade, claims some of the most astonishing statistics in popular music. In the years 1969 through 1974, no other group achieved more top 10 hits, moved more records or sold more concert tickets than THREE DOG NIGHT.

THREE DOG NIGHT hits weave through the fabric of pop culture today, whether on the radio where they are heard day in and day out, in TV commercials or in major motion pictures -- songs like “Mama Told Me (Not To Come)”, “Joy to the World”, “Black and White”, “Shambala” and “One” serve to heighten our emotions and crystallize THREE DOG NIGHT’s continuing popularity.

This Grammy-nominated band is not content resting on its legacy alone. Always working to expand its audience, THREE DOG NIGHT has embraced and been embraced by 21st century music technology. New and existing fans buy THREE DOG NIGHT’s music on iTunes as well as at record stores. In fact, releases from this decade alone have sold well over a million copies.

THREE DOG NIGHT also pushed boundaries by recording with the London Symphony Orchestra, giving fans new and old a chance to experience its dynamic performances of the hits as well as several new songs. The project, recorded at the famous Abbey Road studios in London and released to coincide with the band’s 35th Anniversary, added exciting new orchestral arrangements to THREE DOG NIGHT’s signature sound.

THREE DOG NIGHT maintains an aggressive, year-round touring schedule of over 90 dates a year. The hit filled concerts are performed for generation-spanning audiences by Danny Hutton (founder/lead vocalist) and Michael Allsup (guitar) with Paul Kingery (bass/vocals), Pat Bautz (drums),) David Morgan (vocals) and Howard Lavarea (keyboards). The band’s now-famous name refers to native Australian hunters in the outback who huddled with their dogs for warmth on cold nights; the coldest being a “three dog night”.

continue to sell around the world, reaching beyond the borders of the U.S. into Japan, Canada, Holland, England, Germany, Spain and elsewhere. Tens of millions of THREE DOG NIGHT records have been sold through the years.

Created in 1968 by Danny Hutton, THREE DOG NIGHT recorded the music of the best (and mostly undiscovered) new songwriters of their time including Harry Nilsson, Randy Newman, Elton John, Laura Nyro, Paul Williams and Hoyt Axton among many others. The group’s eclectic taste, combined with their ability to recognize and record hits in a unique, distinctive and appealing style, resulted in THREE DOG NIGHT dominating the charts for years.

Now, marking 50 years on the road, THREE DOG NIGHT continues to grow its fan base by keeping up a full schedule of concerts at theatres, performing arts centers, fairs, festivals, corporate events, and casinos. Since 1986, the band has performed over 2,500 shows including two Super Bowls. 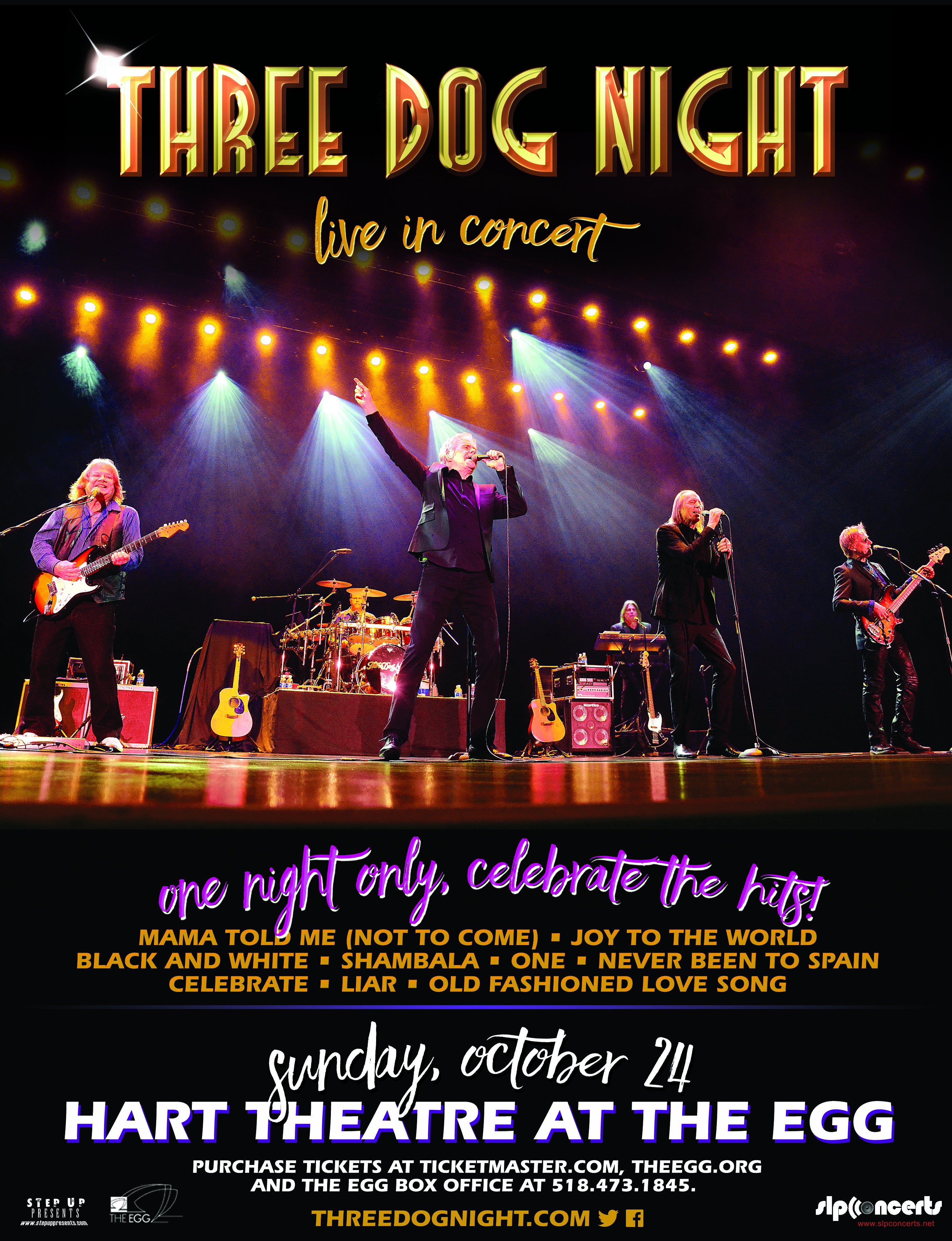